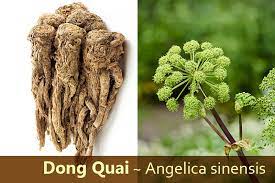 The Native origin of the herb

The Native origin of the herb is China as about 45 species of Angelica are widely distributed over there (Wei, W. L., et al., 2016)

Common uses of the herb

It was used to treat fever, warm malaria, and hemifacial (nervous system disorder in which the muscles on one side of your face twitch involuntarily) in the past. It is a widely used herbal decoction in traditional Chinese medicine primarily to promote the "blood" circulations and treat menstrual disorders such as dysmenorrhea, irregular menstrual cycle, and post-menstrual syndrome (PMS) symptoms

Dang Gui is used for menstrual cramps, premenstrual syndrome (PMS), and menopausal symptoms. It is also used orally as a "blood purifier"; to manage hypertension, infertility, joint pain, ulcers, "tired blood" (anemia), and constipation; and in the prevention and treatment of allergic attacks.

Effectiveness of herbs for specific conditions

The most common use of the drug is the treatment of night sweats, hot flashes, and flushes Vulvovaginal atrophy, often called vaginal dryness, is related to decreased estrogen associated with menopause. The drug alone cannot be prescribed but it is given with a combination of other herbs. And its combinational form with Chuanxiong Rhizome, Alismatis Rhizoma, Paeoniae Radix Rubra has reduced the problem by 70 %.  (Ling, F. A. N. G., et al 2012)

Herb can increase the coronary blood flow by dilating the coronary vessel and reduces the rate of respiration as well. A study conducted on animals revealed that the watery extract of herb showed protective results against the myocardial abnormality and injury caused by ischemia (Ling, F. A. N. G., et al 2012)

The herb of Dong Qui is contraindicated during pregnancy specifically in the period of the first trimester as it contains powerful uterine wall stimulating and it should not be given to the breastfeeding mother Dong Quai is used for menstrual cramps, premenstrual syndrome (PMS), menopausal symptoms, blood purifier to manage hypertension, infertility, joint pain, ulcers, constipation and treatment of allergic attacks (Goh, S. Y., & Loh, K. C. (2001).

When taken for a long time especially the high doses of herb can make an individual more sensitive to sunlight causing skin rashes or inflammation. Besides this, some adverse reactions reported were loss of appetite, gynecomastia, and bloating as well (Amato, P., et al., 2002).

Its combinational form with Chuanxiong Rhizome, Alismatis Rhizome, and Peonies Radix Rubra has reduced the problem of menopause by 70 %.

A.sinensis are accessible in a few unique structures, and doses fluctuate in like manner. Commonplace oral doses are as per the following: dried A. silences root: 3－15 g every day by decoction; powdered root: 1－2 g multiple times day by day; tea: one cup 1－3 occasions day by day (1 g for each cup); color (1:2): 4－8 mL (1－2 tsp) each day; and cases/tablets: 500 mg 1－6 occasions day by day.